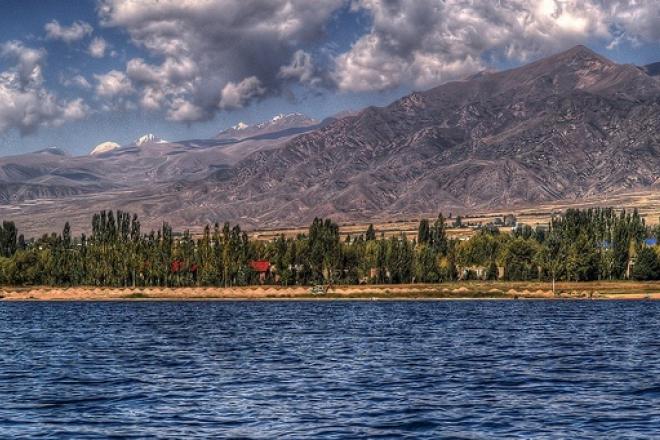 Issyk-Kul (also Ysyk Köl, Issyk-Kol: Kyrgyz: Ысык-Көл, Isıq-Köl, ىسىق-كۅل‎, [ɯsɯqkœl]; Russian: Иссык-Куль, Issyk-Kulj) is an endorheic lake in the northern Tian Shan mountains in eastern Kyrgyzstan. It is the seventh deepest lake in the world, the tenth largest lake in the world by volume (though not in surface area), and the second largest saline lake after the Caspian Sea. Issyk-Kul means "warm lake" in the Kyrgyz language; although it is surrounded by snow-capped peaks, it never freezes.[5]

About 118 rivers and streams flow into the lake; the largest are the Djyrgalan and Tyup. It is fed by springs, including many hot springs, and snow melt. The lake has no current outlet, but some hydrologists hypothesize[8] that the lake's water filters deep underground into the Chu River. The bottom of the lake contains the mineral monohydrocalcite: one of the few known lacustrine deposits.[9]

The lake water's salinity is approx. 0.6% – compared to 3.5% salinity of typical seawater – and, although the lake level is still currently some 8 metres (26 ft) higher than in medieval times, its level now drops by approximately 5 centimetres (2.0 in) per year due to water diversion.[10]

Administratively, the lake and the adjacent land are within Issyk-Kul Region of Kyrgyzstan.

During the Soviet era, the lake became a popular vacation resort, with numerous sanatoria, boarding houses and vacation homes along its northern shore, many concentrated in and around the town of Cholpon-Ata. These fell on hard times after the break-up of the USSR, but now hotel complexes are being refurbished and simple private bed-and-breakfast rentals are being established for a new generation of health and leisure visitors.

The city of Karakol (formerly Przhevalsk, after the Russian explorer Przhevalsky, who died there) is the administrative seat of Issyk-Kul Region of Kyrgyzstan. It is near the east tip of the lake and is a good base for excursions into the surrounding area. Its small old core contains an impressive wooden mosque, built without metal nails by the Dungan people, and a wooden Orthodox church that was used as a stable during Soviet times (see state atheism).