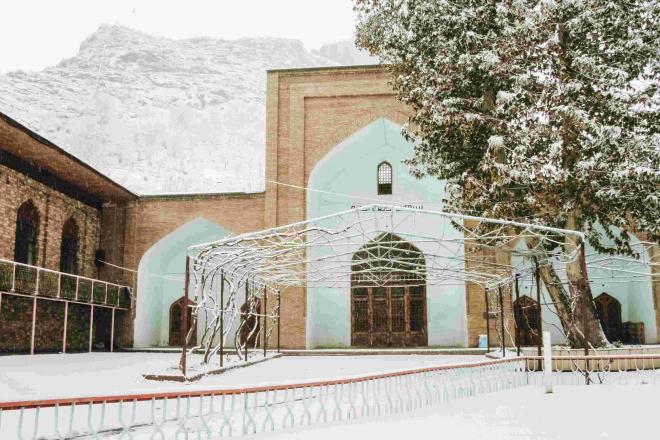 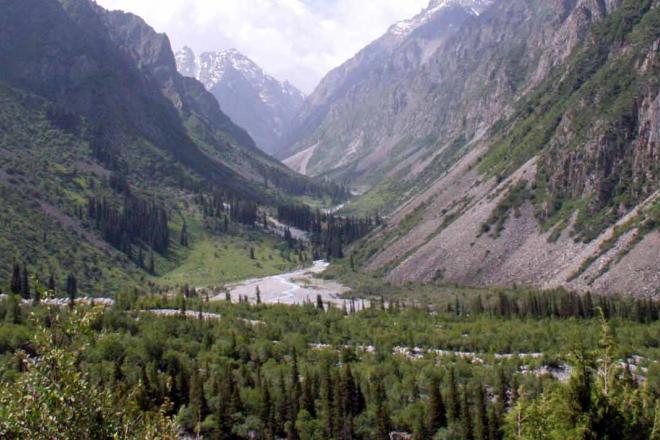 The first ranked place is the one of beautiful lakes in the world. The Lake Issyk Kul, nicknamed “the Pearl of Central Asia.” The Lake Issyk Kul is the world’s second largest alpine and saline lake with more than 180 km long, about 75 km across and an attitude of 1650 m. The Issyk Kul lake meaning is “Hot Lake” and it never freezes even the winter period. Snow-capped Tien Shan Mountains ring the lake, the place to go offers a variety of water sports and resorts, and there are many beautiful places to visit and explore around the lake.

This is an alpine national park or Ala Archa gorge in the Tian Shan Mountains of Kyrgyzstan. Established in 1976 and located approximately 40 km from the city of Bishkek. The best hiking area, gorgeous mountains with a white cup (Ala-Too) and the rapid river- Ala Archa in touchable distance. Bizarre crystal fresh air and fantastic tourist site views.

Bishkek is the capital city of Kyrgyz Republic, or simply Kyrgyzstan. The city is the mix of ancient nomad traditions, many noisy eastern bazaars and handmade souvenirs, shops and the past Soviet’s era good planned and erected buildings, green parks, alleys and statues and as well as the modern architecture , including mostly concrete and glass buildings. The tourist place offers variety of entertainment, including many museums, theatres, cinema, pubs, nightclubs and more and more.

The Burana Tower is a 25m high tower, a once 40 meters tall minaret, is all that leftovers of the ancient city of Balasagun. Soghdians, a people of Iranian origin, founded the city Balasagun and it was the capital of the Kara-Khanid Khanate from the 10th century until the Kara-Khitan Khanate took it in 1134. The Mongols then captured it in 1218. The Mongols called it Gobalik ("pretty city"). Nowadays, it is one of Kyrgyzstan’s most famous historical sites located near the city of Tokmok, between Bishkek and Issyk –Kul region around 80 km far from Bishkek.

Son Kul Lake or the old name is Sonun Kul Lake (meaning “Beautiful Lake”). As per tripadvisor’s reviews, the tourist site is a high ranked must-see place. The alpine lake with the altitude of 3000m, area 270 sq.km is the second largest and fresh water lake in Kyrgyzstan. You will visit the Kyrgyzstan Happy Nomad village. An enjoyable night in the Kyrgyz yurts (nomad mobile home), delicious nomad foods and real nomad hospitality are that things you will meet in the Nomad village.

In the summer time, (usually form the last decade of May to the end of the September) the tourist place-the wild pasture and the nomad village are busy.  Dotted yurts, walking happy tourists, travellers taking pictures on sites and friendly and smiling local hosts is the usual picture of the exotic Kyrgyzstan Happy Nomad village. Foreign tourists and travellers are more than local people are there. Who knows, maybe you can meet people from your country or old friends.

This is a 15th century Silk Road stone caravanserai; however, some sources believe that it is a 10 –Century Cristian monastery. This must-see tourist site located in Atbashy district, Naryn Province, Kyrgyzstan. The Tash Rabat caravanserai (Kyrgyz meaning “Stone fortress” or simply a roadside inn where travelers or caravaners could rest and recover from the day's journey) placed at an altitude of 3,200 meters, and 491 km or 6.5 hours drive from Bishkek.

The city of Osh is the 3000 years ancient city and it was an important part of the Great Silk Road. A long time ago, approximately for over two thousand years, the city was famous for its trade location, colourful and noisy eastern bazaars and cozy and safety caravanserais. Later, in the 8th century, Osh was known as a center for silk production along the Silk Road. The nowadays, the city has monuments, including one to the southern Kyrgyz "queen" Kurmanjan Datka and one of the few remaining statues of Lenin. You can visit the Russian Orthodox Church reopened after the Soviet Union collapsing, the second largest mosque in the country, and discover the 16th-century Rabat Abdul Khan Mosque.

#8. Sulayman -Too mountain, or Solomon Throne.

Karakol (formerly Przhevalsk ) is a town situated on the Southeastern shore of Issyk-Kul Lake in Kyrgyzstan. It was established in 1869 as a Russian military site. Currently, the city of Karakol is the fourth largest city of Kyrgyzstan, and a popular all year-round tourist destination place because of its ski resorts in wintertime and stunning Issyk Kul lakeshore and mountains hikes suitable in the summer period. Karakol is the centre of Issyk Kul province and a starting point for some of the most beautiful mountain areas in the world, famous with their Tian-Shan fir forests- the valleys of Terskey Alatau mountain range: Jety Oguz, Karakol, Altyn Arashan and some others.

Visit the two historical tourist sites such as the 18-Century Dungan Mosque and the Orthodox Cathedral of the Holy Trinity and the Memorial Museum of N. M. Przhevalsky in Karakol.

The Jety Oguz is a district of Issyk-Kul Region in northeastern of Kyrgyzstan.The Jety-Oguz gorge (“Rocks of Seven Bulls”) is the one of the most stunning tourist sights of the Northern Kyrgyzstan, a highland valley formed by the same name -Jety-Oguz River that streams into the alpine Lake Issyk-Kul. The well-known “Jety-Oguz” resort was built near a hot spring. Another the best sight for lovers is the gorgeous the "Broken Heart" rock. Visit the place to hear the Kyrgyz legends about the Jety-Oguz gorge (“Rocks of Seven Bulls”) story and "Broken Heart" folk tales.

Visit, discover and go with the AI TOUR Kyrgyzstan Travel Agency to explore the best 10 must see places and fantastic tourist destinations of Kyrgyzstan.